Detail of Michelangelo's famous statue of David, showing a young man's penis with a relatively long and tight foreskin.
This is of course the penis of his model - the real David was circumcised.


Some foreskins are long, some are hardly there at all

When the penis becomes erect the skin doesn't enlarge, only the penis beneath. This means that the foreskin - unless it is unusually long or tight - generally retracts automatically, leaving the glans exposed.

Most natural men - nearly two-thirds - have an exposed glans when erect. I emphasize this point because it seems to be a common misconception among circumcised men that the skin of a natural penis rolls back when the penis is inserted in the vagina during intercourse. Not so!

A well known British sexologist - Dr Robert Chartham - reported on a survey of 2,500 natural men and in general found shorter foreskins than our Australian survey did. Only 45% had a covered glans, 32% were half-covered and 23 percent had all of the glans exposed. This may reflect the more selective nature of circumcision in the UK - only long or tight foreskins get removed - or the cultural habit of retracting babies foreskins from an early age.

Although most of the men surveyed could retract their foreskin, over a third had not succeeded in doing so until after age 10. Some of these were later circumcised - in a few cases without ever having managed to get their skin back.

There not a strong connection between late retraction and a tight skin in later life. Some men who could only retract after puberty ended up with skins that came back at a touch, while many men with tighter skins had been able to retract them since infancy. However, a foreskin that hadn't been retracted before puberty was definitely likely to be longer in adulthood. It seems that if a foreskin can slip back as the penis enlarges, it doesn't grow any further. A tight foreskin, that cannot do this, will be stretched as the penis enlarges, and it will grow with the rest of the organ.

So how common is phimosis (the medical term for a non-retractable foreskin)? In the 1950s, a study of over 1000 adult soldiers in the British Army found that 14% of natural men had foreskins which were non-retractable. This compares with the 20% of boys under 13 who had the same problem in Gairdner's survey of the same period. These are really quite high proportions considering that not only is a tight foreskin a health hazard, it is a pretty effective barrier to sex. None of our surveys of men have found such a high proportion, but then many of the respondents had been circumcised in childhood or as an adult, so most problem foreskins had been removed.

Australian women's replies told a different tale. Most of the women had had natural boyfriends, and one in eight of them had at some stage had a man who found it difficult to retract his skin. So even in Australia, where circumcision is commonplace and one might expect that very few problem foreskins would be left untreated, phimosis is quite common.

Just how frequent are such problems in cultures where circumcision is rare? A couple of Asian studies suggest that they are very frequent indeed. In Japan, a survey found that around 50% of males suffer from foreskins which are too tight to permit intercourse or adequate hygiene. In Bali (where, unlike the rest of the Indonesian archipelago, circumcision is not practised) phimosis affects half the male population aged 18 or over. As with foreskin length, it is hard to disentangle racial and cultural factors. The Balinese study stressed that cultural traditions associated with the Hindu religion forbid medical intervention with the foreskin, however tight, and this must contribute to the problem. In Japan the situation is a little different. A bare glans is culturally desirable and in fact 'penis operation' (circumcision), once quite uncommon, is now widely advertised in Japanese mens' magazines and on the Internet. Whatever the cause, it seems clear that away from the circumcision traditions of the English speaking countries, phimosis is a pretty common problem. 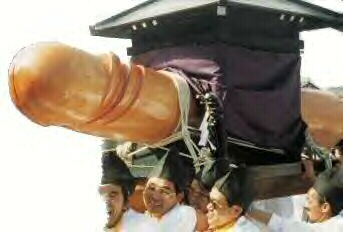 The famous Japanese "Huonen-matsuri" shrine on its annual procession through the streets. The cultural preference for the retracted foreskin is evident!

Most adult, natural penises have a bare glans when erect, and quite a few remain uncapped even when flaccid. While most foreskins retract with no more than a touch, the ones that do not can be a problem.